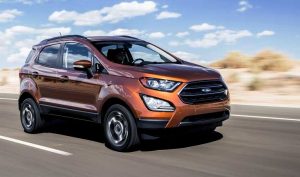 New Delhi: US auto major Ford is recalling diesel variants of its newly launched compact SUV EcoSport in India. Irectify defects in the instrument used as an aid in starting the engine.

“As part of routine checks, we discovered a potential concern with EcoSport diesel variants related to the Glow Plug Module which requires relocating the module. We are contacting customers to take their vehicle to their Ford dealership to have the work carried out,” Ford India said in a statement on Thursday.

The company, however, did not share the number of vehicles it is recalling.The company, which is present in the country through a wholly-owned subsidiary Ford India, added that no accidents or injuries have been reported related to the issue and this is a proactive, voluntary recall action to ensure customers’ safety and satisfaction.

Ford had launched the much-awaited SUV in India last month at a starting price of Rs. 5.59 lakh (ex-showroom Delhi).

Ford India has invested $142 million at its Chennai plant to manufacture the EcoSport. It is also investing $1 billion to set up its second production facility at Sanand that will be operational by 2014. The plant will have an installed output capacity of 2.4 lakh vehicles and 2.7 lakh engines annually.

With completion of the Sanand plant in Gujarat, Ford India will have a total installed capacity of rolling out 4.4 lakh vehicles and 6.1 lakh engines every year.